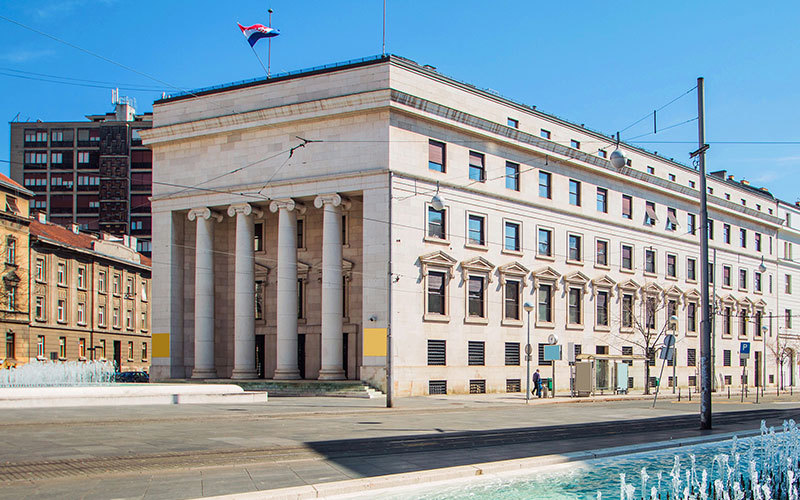 TIP: THE BUILDING IS COVERED IN BRAČ WHITE STONE. THE SAME AS THE WHITE HOUSE IN WASHINGTON.

Croatian National Bank issues banknotes and holds the national monetary reserves. Its main responsibilities are maintaining the stability of the national currency.

Croatian National Bank building is the attraction, not the institution.

It is situated in the former Zagreb Stock Exchange palace which was erected in 1927.

The most significant Brač white stone buildings are:

The palace was built to accommodate the Zagreb Stock and Commodity Exchange. The Croatian National Bank started using the building after World War II.

The appearance that characterizes the façade continues into the entrance area. The area has the shape of a tall vestibule with a coffered ceiling, decorated with rosettes. The main focus of the space is a staircase leading to the foyer of the main hall.

Architect Viktor Kovačić, also known as the father of modern Croatian architecture, did not live to finalize his masterpiece. He died in 1924 so the decoration and refurbishment of the interior were finished by his associate Hugo Erlich.

What can you see and do at the Croatian National Bank?

It is a national bank so, unfortunately, indoors is not accessible to the public. On the other hand, you can marvel at its architectural beauty. With its four columns, it reminds of a Greek temple. But its key point is its façade which is covered in island Brač white stone. The same as the Washington White House.

Croatian National Bank is not accessible to the public.

How to get to Croatian National Bank?

It is situated in a small square, just east of the Ban Josip Jelačić square. It is approximately 10 minutes walking distance, just through Jurišićeva Street.

Close to the bank is Parking Zone 1. Read our guide about Zagreb Parking, Garages and Zones, Where to Park in Zagreb? We update it regularly with the latest rates, and guides on how to pay for parking in Zagreb.

Taxi or UBER is always an option.

Closed to the public.